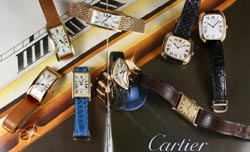 Perhaps no single jewelry or watch brand evokes more glamour, design innovation and noble ties than Cartier. Founded in Paris in 1847, the firm immediately set a high standard for style and luxury creating magnificent jewelry for some of the world's most high-profile clients.

The firm was always connected to the biggest names in fashion, politics and culture, and in 1904, designed the first men’s wristwatch, the Santos, named for famed Brazilian aviator Alberto Santos-Dumont. Made in a square case, with a bezel set prominently with eight screws and featured thick lugs to connect the gold head to a strap. Not only was this model more practical for an aviator who could now read the time on his wrist while flying, but it also signaled a attention to aesthetics that was not always seen in timepieces of the era.

Over the years, Cartier has produced some of the coolest and most iconic watches, including the hyper-elongated Tanks and oval Bagnoires. Their Chinese Tanks and rhombus-shaped asymmetrical driver’s watch are still some of the best simple watch designs ever. In 1967, they created the Crash watch, one of the most unusual watch designs that broke all sorts of rules with an asymmetric, organic-shaped case, said to have been inspired by the shape of a Bagnoire Alongée watch after a car crash had warped and melted the case. It’s also clearly inspired by Salvador Dali’s paintings of melting clocks in a dreamscape.

In the 1920s Cartier teamed with Edmund Jaeger, one of the leaders and innovators of movement manufacturing, to create European Watch and Clock Co. Up to this point, Cartier movements were largely sourced from the top of the Geneva watch making firms like Patek Philippe and Audemars Piguet. Although they would continue to work with these houses for special orders and retail pieces, the majority of their top-line items would feature EWC movements. Based in the Jaeger-LeCoultre factory, EWC movements quickly gained a reputation for being of the highest quality and most exacting specifications. Today, Cartier watches from the 1930s through the 1950s command a premium when they feature an EWC movement as they are seen as the most original pieces possible.

Not only was Cartier a bold designer and innovator in its own right, but it also collaborated with the top watch firms to retail their most desirable pieces to their devoted clientele. Patek Philippe's perpetual calendar chronograph watch, Ref. 2499, and Rolex's Daytona and Paul Newman models are just a two of the high-profile pieces that can be found today bearing the distinctive Cartier retailer signature on the dial as well as their iconic hand-stamped reference numbers on the lugs. Such signatures can double the value of otherwise highly collectible watches.

Cartier never had the production numbers of firms like Rolex, so their watches from the early part of the 20th Century are harder to find and feel a bit more personal. When I do find them, many of them have been altered and monkeyed with over the years, which I don’t like. Finding examples with original parts and in excellent condition is very difficult, but when I do find them, there’s really something magical about them, unlike almost any other brand’s watches. They have a classic elegance that you just don’t see with other companies. They’re rather simple designs but are beautiful. I also love how Cartier really was the first company to design things that we take for granted today, like rectangular and jumbo watches.

Some of the most famous and powerful people in the world from Frank Sinatra and Cary Grant to Harry Truman, Charles De Gaulle and Franklin Delano Roosevelt have worn Cartier watches. It has always been the pinnacle of style and technical perfection. Today their vintage watches stand out for their amazing, classic design. They’ve made some of the best looking oversized watches, like the Tank Alongée Americaine or the Bagnoire Alongée at a time when no other firms dared to make jumbo watches. When worn on a bracelet their watches pop off the wrist with a bold look. Cartier is the epitome of that fantastic 1920s art deco French style that works today for either a casual or formal style.

One of the best things about these watches is that the market has been growing around the world and continues to get stronger today. I still think these pieces are great values for their amazing design, history and quality, and I think they have a lot of room to get more valuable in the future. Over the past decade, I've seen how pieces that were a few thousand are now selling for five figures as demand grows. There are still affordable pieces in the mix and I think those will grow in value as well. When you look at recent auction and market prices for early tanks, it's clear that these are the new hot ticket item for collectors.

Get more information about this vintage Cartier watch for sale.