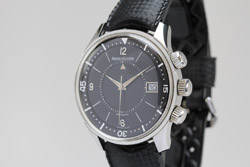 I have had both the 1965 and 1968 version of the Jaeger LeCoultre Polaris several times but have never seen or had access to the 1963 prototype which is pictured above. The Polaris was developed in 1962 and the first 50 pieces were produced in 1963 as the prototype. They were never offered for sale to the general public. These pieces were given to the employees of Jaeger LeCoultre. The Polaris was later produced between 1965 and 1970 with a total production of 1714 pieces. Jaeger gave a code name to the Polaris of E859.

The 1963 version is very similar to the 1965 version with following differences:

On the bottom of the 1965 version the dial says automatic alarm calendar where on the 1963 version it just says automatic. It also seems like the writing on the dial of the 1963 version is more of a white paint and the 1965 version was silver gilt writing. The cases appear to be the same except the the 1963 version is stamped 1963 inside. This particular 1963 version is in brand new condition which is incredible to find because these watches were used for diving and exploration. Due to the nature of the use of the Polaris these models are typically found in used condition and to find one in new condition is extremely rare. A few years back Jaeger LeCoultre reproduced the 1963 version and came out with a tribute watch based on its design. This particular 1963 watch pictured above watch is so mint it could pass for a brand new tribute re- edition.