The World of Longines Chronographs 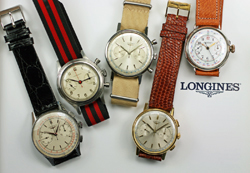 The vintage Longines chronographs from the 1930s to the 1960s are highly sought-after and have exceptional quality. Unlike most watch manufactures from the time period, Longines made their own in-house movement instead of contracting an outside company. Their most collectible movement was their caliber 13ch which was a 17 jewel fly-back manual wind movement produced from the 1930s to the 1940s. After the 13ch caliber came the Longines 30ch which is also a high quality movement and very desirable.

The dials on the Longines are beautiful with many having multiple colors and complication such as a pulsations scale.

Longines also made very strong and unusual cases for their chronographs. Many of them had stepped bezels and ornate lugs typically made of 18 karat gold or stainless steel.

There is a terrific book on Longines watches written by John Goldberger which I suggest buying if you are into these watches. We will be posting several great examples of Longines chronographs for sale.