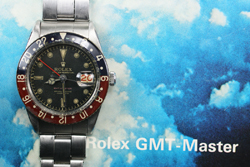 Two distinctive features of the Reference 6542 is that it has a crown without guards and the bezel is made of "bakelite". This 1955 model is extremely rare for the fact that it was the earliest model, and it was not part of a mass production run like the later models from 1958. I have spoken to several collectors, and they say this particular model was a test for Rolex until it went to actual production, and there were probably less that 20 of these models ever produced. I have only seen one other in the last 20 years.

The 1955 reference 6542 has distinct features unlike the later versions. The most important feature is that the word GMT Master is written in red which you never see on the model. Also, the luminescent markers are larger on the 1955 model than on the later versions. Last, the inside of the case back is dated 1955.

The bakelite bezel Rolex GMT is a true collector's item, and to find the 1955 version is an impossible feat, especially one with all the proper original features.