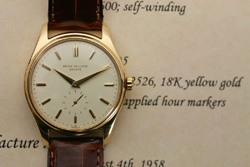 The Patek Philippe reference 2526 was introduced in the early 1950s and is considered it to be the most iconic time only wristwatch by many collectors. The case design of the watch is timeless as newer Patek Philippe models were molded after the 2526 especially Patek's reference 5035 and 5036. Also, the case is very strong with thickness of seven millimeters and a water resistant style screw down back. 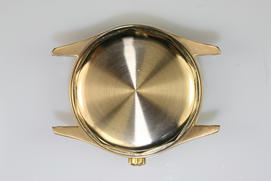 The 2526 is most famous for its porcelain dial and 30 jewel automatic caliber 12-600 AT movement which includes and 18k large gold rotor. This was Patek Philippe's first automatic movement which has always been a great timekeeper. The porcelain dial of the watch has a beautiful ivory color with baton markers and sub-seconds. Typically wristwatch dials from the period were made of metal, and therefore the soft look of the porcelain is very pleasing to the eye.

Another great design detail of the 2526 is the crown which is famous for its double "P" logo as opposed to Patek's famous Calatrava crest logo. 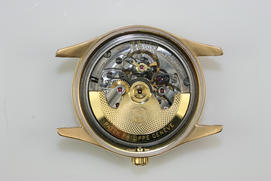 The 2526 was made in four case metals which include yellow, rose, white gold and platinum. Yellow gold had the highest production followed by rose, platinum and then white gold which is the rarest metal for this watch. I have heard of stainless 2526 but has not yet surfaced on the market and was probably a prototype ($$$$$). According to auction houses and literature I have read only 600 pieces were produced in all the metals.

Depending upon the metal, condition, and dial variation the value of 2526 can range from $15,000 up to $200,000. The watch in 18k yellow ranges from $15,000. to $45,000. The most important factor that affects the value is the porcelain dial. Porcelain is a fragile material, and it has the possibility of cracking if it is mishandled which typically occurs when a watchmaker/butcher gets to the watch. A cracked dial decreases the value of the watch by 40 to 50% which is scary because sometimes it is very difficult to see a hairline even with a 10 power loupe. The next valuation factor is based upon the case condition which are typically very good to excellent with this model. However, sometimes these cases are over polished losing hallmarks and the original form of the watch which could affect the value by 30 to 40%.

There were different series made of the 2526 and the slight variations exists in the porcelain dial. The early generation dial is the most sought-after which can be determined by a small dimple that is noticeable underneath the baton markers. One the later series, the dial markers lay flat on the dial with no dimples underneath. Typically the early generation dial is worth about 10 to 15% more, but I have observed in auctions lately collectors are looking for flawless dials and similar prices have been relised for both dial types.

Overall, the Patek Philippe 2526 has a great case design, a technical movement, historical importance, and was produced with beautiful porcelain material. No wonder this model is highly sought-after and has always maintained and appreciated in value.

Get more information about this vintage Patek Philippe watch for sale.