"On Her Majesty's Secret Service" 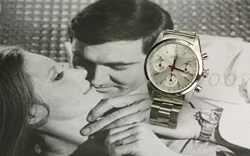 This is an incredible and extremely rare find. This is the actual Rolex Chronograph that was worn by George Lazenby as James Bond in the 1969 film On Her Majesty's Secret Service. It is the classic Rolex chronograph ref #6238 or known as the Rolex pre-Daytona. The watch was originally purchased by EON productions on October 23, 1968. When the film production was completed, EON productions sold off some of the props from the movie, and this Rolex Chronograph was one of them. This particular watch has the same serial number and is the same watch that sold in a London Christies Film and Entertainment sale in December of 2003 which confirms its provenance.

This particular watch has some unusual features for a 6238 which are the black hour and minute hands and the red seconds hand. I am not sure if that was done for the movie or by the party that purchased it from ION productions.

An article about this James Bond Rolex pre-Daytona watch appears over at Hodinkee.com. Read the article.

An article also appears appears over at The James Bond Watches Blog.