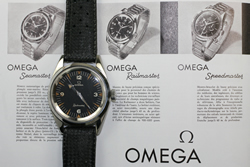 Since the 1950s several watch manufactures have produced a special series of "antimagnetic" watches designed for people who work around magnetic activity. Antimagnetic watches were typically purchased by scientists and engineers, so the market for them is limited. As a result, few have been produced making antimagnetic watches quite rare and valuable.

The Omega Railmaster was introduced in 1957 and was marketed to railway professionals. Since the early pocket watch days, Omega has always provided clocks and watches for major railroad systems all over the world.

The Railmaster is an Omega's reference 2914. The case, dial, movement and dust cover of this watch were all made of special construction and materials to shield magnetic activity. The Railmaster is a mechanical watch and powered by Omegas caliber 284 17 jewel copper finished movement. The movement is protected by a special double case and an iron dust cover that protects up to 1000 Gauss. The dial was also made thicker than normal for added protection.

In addition to the technical construction of the Railmaster, the overall design is unmatched compared to the other antimagnetic watches. The Railmaster's black dial has beautiful graphics with its triangular luminescent markers and hands. The 36mm case is a perfect size and thickness with faceted lugs. The watch looks great on either a leather of oringinal Omega stainless steel band.

As far as value I have seen these watches trade all over the board from $6,600. to $26,000. The price disparity could be based upon watch condition and different variations which is a topic that we will talk about in a future article.

Below are other antimagnetic watches from some other brands:

Get more information about this vintage Omega watch for sale.