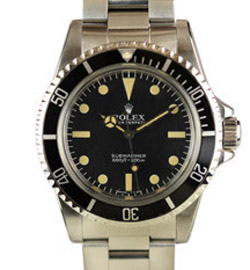 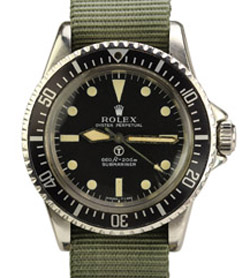 In early to mid 1970s Great Britain used the Rolex Submariner reference 5513 as a source for its military watch. There were only a few hundred of those watches issued which makes them quite rare and highly collectible. In a sense it is limited edition watch which is an unusual item for Rolex to produce. Below are the differences between the civilian and military model.

1. The hands of the military sub are called sword hands as opposed to mercedes hands on the normal 5513.

2. The bezel insert of the military submariner has the additional second hash marks for synchronization

3. There is a T on the bottom of the mil sub that represents the markers are made of tritium.

4. The lugs of the Military sub are fixed pins and can only be worn on nato band.

5. There are british military issue numbers on the back of the military submariner.

7. The price of the military sub runs about 20 times the value of a civilian 5513. The last few military submariners at Christie's sold north of $150,000.