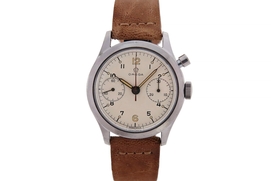 This a very rare variation of the Omega Military one button chronograph for the Royal Canadian Air Force. It is in amazing all original condition with an unpolished case and mint dial. In the early 1960’s, Royal Canadian Air Force commissioned 5 companies to produce white dial single pusher chronographs: Lemania, Omega, Rodania, Birks and Breitling. The Omega ones are considered to be the most valuable among collectors. These single pusher chronographs were made in 2 batches as seen on the caseback issue part number starting with either HA60 for 1960 or HA62 for 1962. Both versions are extremely rare with less than 400 pieces combined (95pcs approx of HA60 and 275 approx of HA62) and seldom seen in such excellent condition. The stainless steel, screw back, single-button chronograph was favored for resistance and ease of use by pilots, the white dial for legibility as well as luminous markers and hands, but what really sets these military Omega column-wheel chronographs apart is the hacking mechanism of the Lemania Caliber 2221. This seconds hand halt mechanism is very rare for the time period and allowed the wearer to set the time precisely when stopping the seconds during the time setting.