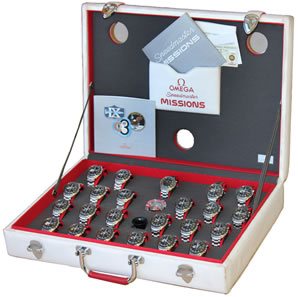 This is a limited edition set of Omega Speedmaster “Missions&rdgquo; numbered 24/40 released in 1997. The set comes with 23 watches made to commemorate NASA space missions from the years 1965- 1973.

The watches come in a beautiful white and red leather case with the series name and Omega name and logo on it.Inside the case is a working replica of the Calibre 1861 18 jewel chronograph movement in a clear case. This is the same movement found in all of the watches in the set.

The collection comprises of 22 Omega Speedmaster Professional watches and 1 Omega Speedmaster “Broad Arrow”, which is a replica of the original Speedmaster worn on the moon. They are all 42mm steel watches with subsidiary dials for the seconds and chronograph function. The Professional has a black bezel inserts while the Broad Arrow has an all metal bezel. Both have tachymetres on the bezels. The Professional models have white baton style hands with white indexes and the Broad Arrow has luminescent arrow-tipped hands and luminescent indexes. All dials are in black. On the case back of each watch is the inscription “Flight-Qualified By NASA For All Manned Space Missions – The First Watch Worn On The Moon.” The mission badges are on the dials of the Professional watches for flights taken on the following missions:

This Omega Speedmaster Missions watch set is for sale on MatthewBainInc.com.