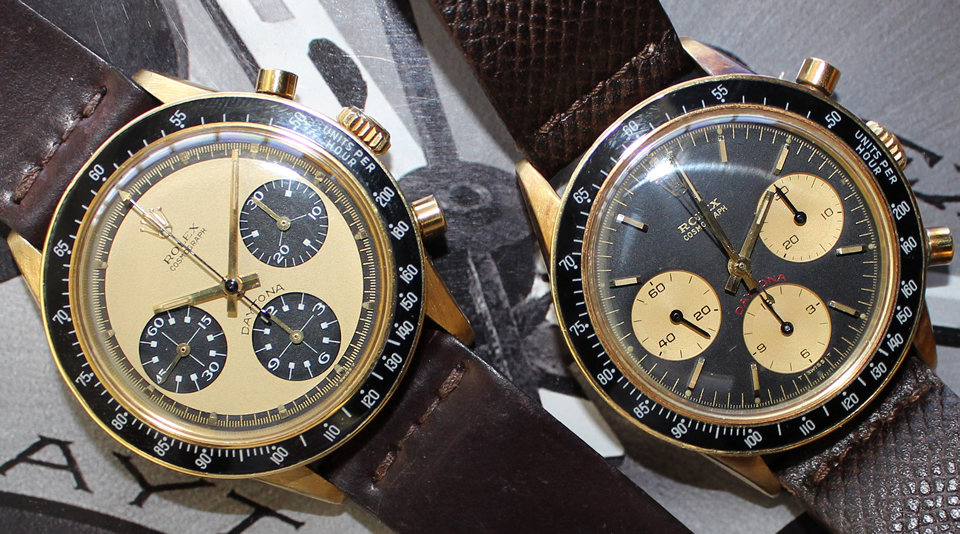 Pictured here is the Rolex Daytona reference 6264, which is considered one of the rarest reference Daytona models ever produced. This reference was only made for one year, 1969. The 6264 is considered to be a transitional model right before the screw down models 6263 and 6265.

As you can see, the 6264 has pump pushers but was equipped with the upgraded 727 caliber movement (the same as in the screw down pusher reference 6263 and 6265). The two watches pictured here are the "Lemon Paul Newman" and an extremely rare variation known as the "Cherry Logo" (an example is described in Pucci Papaleo's 'Ultimate Rolex Daytona' book on page 300.)

The Cherry Logo is extremely rare as the word Daytona is typically written in gold but with this model it is written in red. The Cherry Logo is made in 14k gold and was produced for the American market. The serial range of the 6264 is in the low 2.8 millions. The Cherry Logo which is now available for sale on our website, is in excellent condition. It has a mint original dial, a very sharp case, and a mint acrylic bezel. The watch has been sitting in vault for a very long time as there is beautiful oxidation all over the case.